1:100 Scale Models are the premier line of models introduced here at AeroPro. Great for the corporate executive or a travel office this is a must have for any airline. Below is a sampling of some of the models we have available. Please inquire for availability; we are always adding more models to our fleet. Additionally there are NO molding or setup fees for any model that we don’t have available!

The Airbus Industire A300 is the forerunner of the cargo industry and is still in production through Airbus over 20 years later. This 1:100 scale model accurately represents the aircraft to the utmost detail. The model you see here displays the new livery between Air Hong Kong and DHL and was utilized to promote their new partnership within Asia. It’s use as a corporate promotion helped to spread their new identity to their customers as you can with your fleet of A300s. 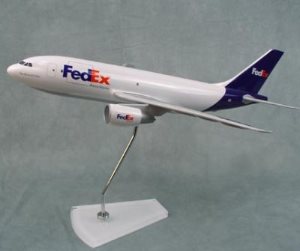 The A310 was the successor to the A300 and with it’s versatile capabilities was able to complement many airlines fleets. Whether on a short hop between Singapore and Jakarta or across the Atlantic Ocean, the A310 was able to accomplish it all. This 1:100 scale model can be in your corporate offices, just like they are at Fedex. Fedex employs nearly 50 in it’s fleet and is the largest twin engine aircraft flying for the company. This work horse can be in your corporate colors, whether in passenger or cargo configuration. 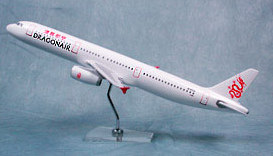 The A318, A319, A320 and A321 are the short haul aircraft of the Airbus fleet. This line was Airbus’ response to the very successful Boeing 737 series of aircraft. Since its inception, the A320 series has proven to be very popular with airlines throughout the world. With a common cockpit in a majority of the Airbus’ line of aircraft, commonality was established within a fleet. Dragonair is one of these Airbus’ customers and have used the A321 for short haul operations throughout eastern Asia. Make the workhorse of your airline available for promotional purposes for the many businessmen and leisure travelers that have experienced this aircraft. 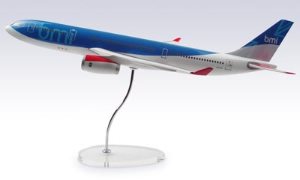 The A330-200 was the successor to the A300/A310 aircraft and was the new direct competitor to the Boeing 767 line. It proved successful in filling the gap for airlines that needed a long haul, effective regional aircraft for low density routing. BMI flies it’s A330s to a variety of destinations throughout the world ranging from Beijing to Chicago from its UK hub. Newly established Ethiad is using the A330 as their choice of display. It will be their flagship model until larger aircraft are acquired in the future. Ethiad used the A330-200 to promote their airline and you too can use the A330-200 in your fleet as the base of promotions throughout the world.

The A340-200 was Airbus’ first four engine aircraft, introduced to airlines in the late 1980s. Since the it has grown and matured, the latest being the A340-600, the longest aircraft in the world. Today the A340 is replacing many 747s in todays long haul fleets. Virgin Atlantic has recently ordered an additional 26 A340-600s demonstrating that this airframe will be the center of major growth for the next 10 years. Airlines like Virgin Atlantic and South African prefer the four engines for long haul oceanic crossings as the aircraft is not subject to ETOPS certification and restriction. Use these model to promote your long haul trips throughout the world. 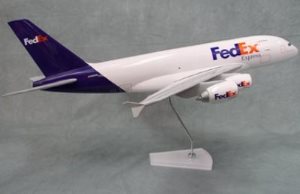 The A380-800 has just come off from the assembly line in Europe and here it is for you in the 1:100 scale model world. Being the largest aircraft ever built for commercial purposes it has overcome major hurdles and will soon be the flagship aircraft for airlines throughout the world. Get your order in early as this flagship aircraft is deemed to be popular for years to come.

The Boeing 737-300 was the first update for the 10 year old -200 series offered by Boeing. First introduced in 1981, it was popular with airliners throughout the world and is the first replacement aircraft offered by Boeing. Introduced with completely new CFM56 engines, it not only provided better range, but was able to increase capacity with less fuel burn. The 737-300 became a workhorse for many airlines working long shifts and taking on the brunt of the work. As the legacy carriers are replacing this aircraft, their lives continue with many new start up carriers throughout the world. Even though this aircraft was introduced 25 years ago, it still does the brunt of the work for your airline. Commemorate the Launch of your new work horse livery with our model. 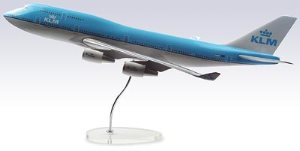 The Boeing 747 series of aircraft have been the pride and joy of many airlines throughout the world for the past 30 years. As the older original aircraft start to see retirement or new owners, the 747-400 series is in full production and is the flagship aircraft of many of the industries well known airlines. As new corporate entities come about, this is the perfect model for you. KLM Royal Dutch used it’s flagship model to represent it’s revising of colors in 2003 and new Ocean Airlines using the classics employed these models to represent their new airline, and so can you.

At the end of the 1970s Boeing was looking for a replacement for the 707 line of aircraft. This line had been in production for 15 years and new, more efficent technology was starting to be offered. Boeing’s solution to a midsized aircraft resulted in the Boeing 767 series which was developed along side the smaller Boeing 757 series. This aircraft was later stretched and given the model designation 767-300. However, the 767-200 offered great range and performance for many airlines that didn’t need the additional capacity of the larger -300 series. Its production lasted over 20 years with -200 series aircraft being built into the 21st century. Even though its production will soon come to an end, this aircraft will never be forgotten as Boeing’s first twin widebody aircraft. 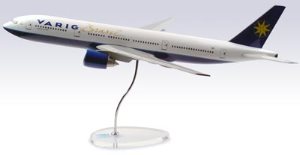 The Boeing 777-200 is the most popular wide-body currently flying today. Since its inception in the mid 1990s, it has been considered the longest flying aircraft in the world. The large and powerful engines by all three manufactures make this aircraft the pride and joy for airlines throughout the world. Varig Brazil is using the 777 to complement it’s fleet of MD-11s and hopes one day to be able to replace the MD-11 as they age through the years. The Boeing 777-200 will be the backbone for long haul operations for Varig and can be represented in your corporate colors too.

The 787-800 will be Boeing’s flagship aircraft, leading the pack in manufacturing technology for years to come. Approximately the size of the 767, this new aircraft will be fabricated with a variety of composite materials. The goal is to save weight as well as add additional strength to the fuselage. Currently over 200 orders for this aircraft have been placed by airlines around the world. Let us bring this model to as you launch this spectacular aircraft in your fleet. 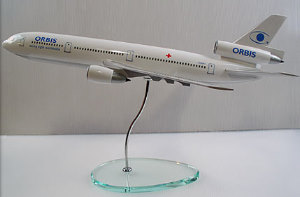 The DC-10 was one of the first widebody trijets to fly the world in the 1970s with direct competition from Lockheed. It proved popular with airlines from British Airways to Air New Zealand due to its long range capabilities that could fly passengers throughout the world. Orbis, the Flying Hospital, uses their DC-10 to fly to disaster areas and locations of need throughout the world to provide humanitarian missions for the less fortunate. Orbis used their flagship aircraft to promote their services and we’ll do the  same for you with this remarkable model! 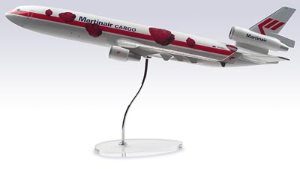 The MD-11 was the successor to the DC-10 produced by Douglas and was introduced in the early 1990s. However, due to some performance issues and the introduction of the more economical 777, many MD-11 sales were cancelled. Since this line was considered to be less than economical for passenger use, the aircraft was reborn as a cargo aircraft. Martinair employs them and has proudly exhibited Rose Blossoms for a commemorative ceremony. This model was used for their special commemoration. Be sure to use it for yours! 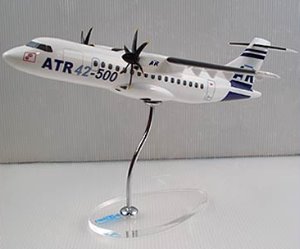 The ATR 42 is the shorter of the two regional aircraft offered by Alenia (ATR). The first successful flight for this airliner was in Decemeber of 1985. The livery was upgraded in 1995 with the -500 series for increased range/power using 6 blade propellars. The ATR 42 is the backbone of HGH regional fleets throughout the world and with its great economical operations you can make this efficient aircraft the proud display of your regional subsidiary. 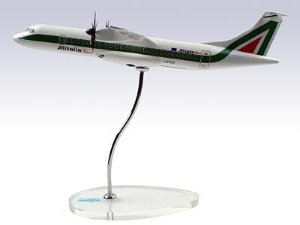 The ATR 72 is the longer of the two regional aircraft offered by Alenia (ATR). The first successful flight was in October of 1989. The livery was upgraded in 1998 with the -500 series for increased range/power using 6 blade propellers. The ATR 72 is the backbone of regional fleets throughout the world and with its great economical operations you can make this efficient aircraft the proud display of your regional subsidiary.

Your resource for Custom Promotions and Models
Featuring...

All products are tested to CPSIA & ASTM F963-08 requirements!